Getting rid of some Brexit / Election rage we are flicking today. FCA, Buses, Soweto, Righteous, Sensations and Producers expected This is how it goes…

James always wins – over the last 20 years we’ve tried everything to stop him.
Changing rules, Introducing new rules, bringing in the drug rule, repealing the drug rule; bringing back the drug rule.

Nothing worked. He’s just too good!.

Annoyingly, James’ brilliance remains supreme – despite a 5 year hiatus – in 2014 he won the World Cup taking away our new trophy – “The Ashes”. Video here

The Ashes is small glass jar filled with ashes of ‘The Beautiful Leg’ (if you’re not familiar with the Beautiful Leg you can find out Here) – so now there’s another trophy none of us will ever win.

Unknown to James, we also created the REAL trophy; The “1992 Ashes”, to be won by the runner up and one which James can NEVER Win.

Filled with ashes of the same Beautiful Leg but in a different jar….it’s all ours!

In the unlikely event that someone else does win,  James hands over ‘The Ashes’ to the competition winner, the ’92 Ashes’ are awarded to the third placed flicker James leaves empty handed.

So this is how it goes.

Labour lose votes to UKIP and the SNP.

Consigned to a Tory government for the rest of time, the only alternative being a BLUE Labour?

Let them win, let them have everything. They won’t leave us alone until they’ve got it anyway.

We’ll organise our lives in our own world, create something beautiful without them that the Tories, the ‘kippers, the silver spooners and super rich want but can never have – we may come second but we’ll be the better team.

So anyway, yes, to celebrate what we saw as the inevitable end of five years of Tory led rule, we organised our 2015 Election Flick.
We voted early, setup by 10 and by 10:30 James was hitting the wine. 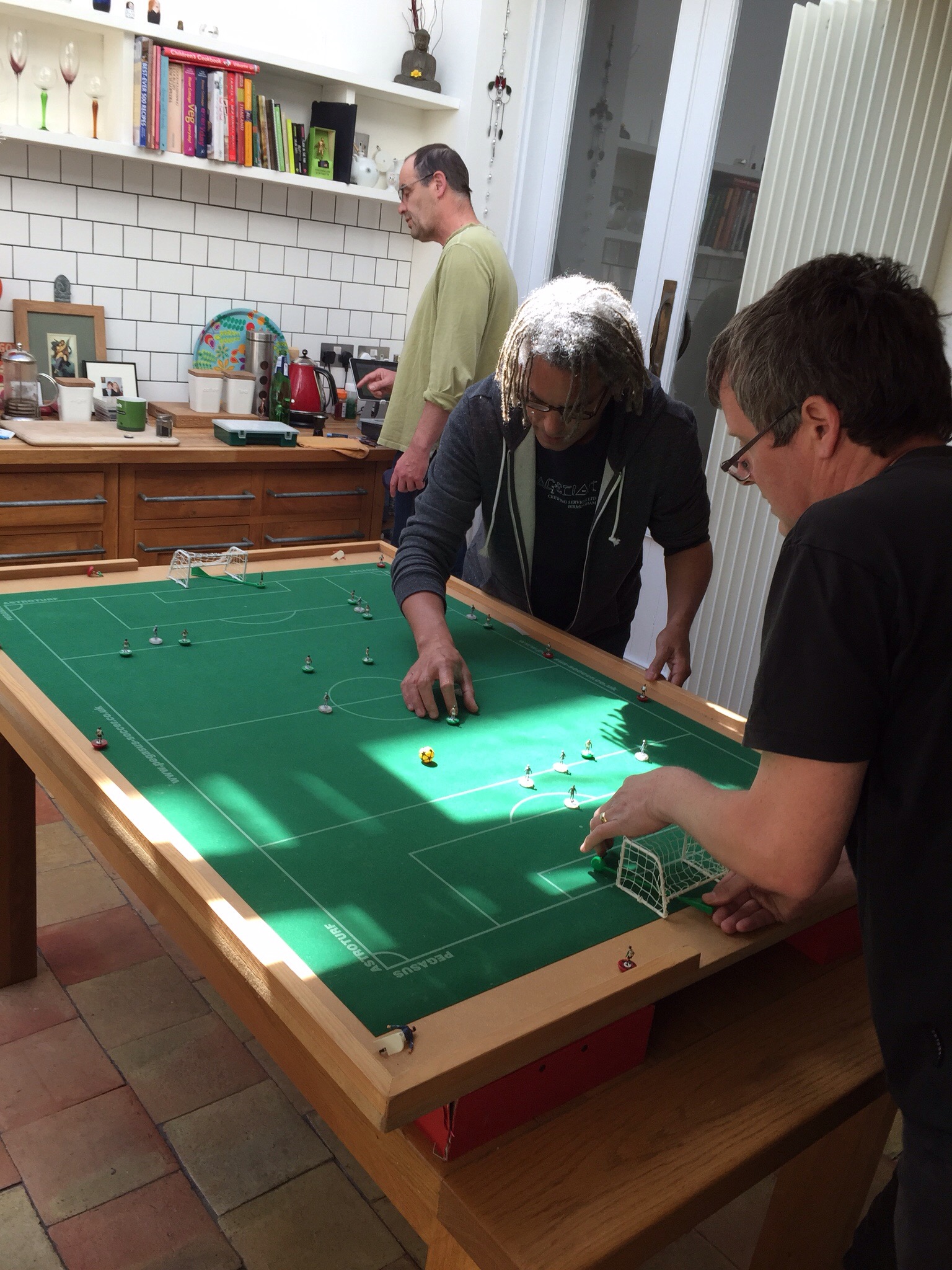 With celebration in the air, we took our eyes off the election and concentrated on the beautiful game.

James signed the Greens’ Caroline Lucas; the SNPs Nicola Sturgeon joined Soweto Storm; while Nick Clegg and Nigel Farage have been turning out for FCA for 5 years now. 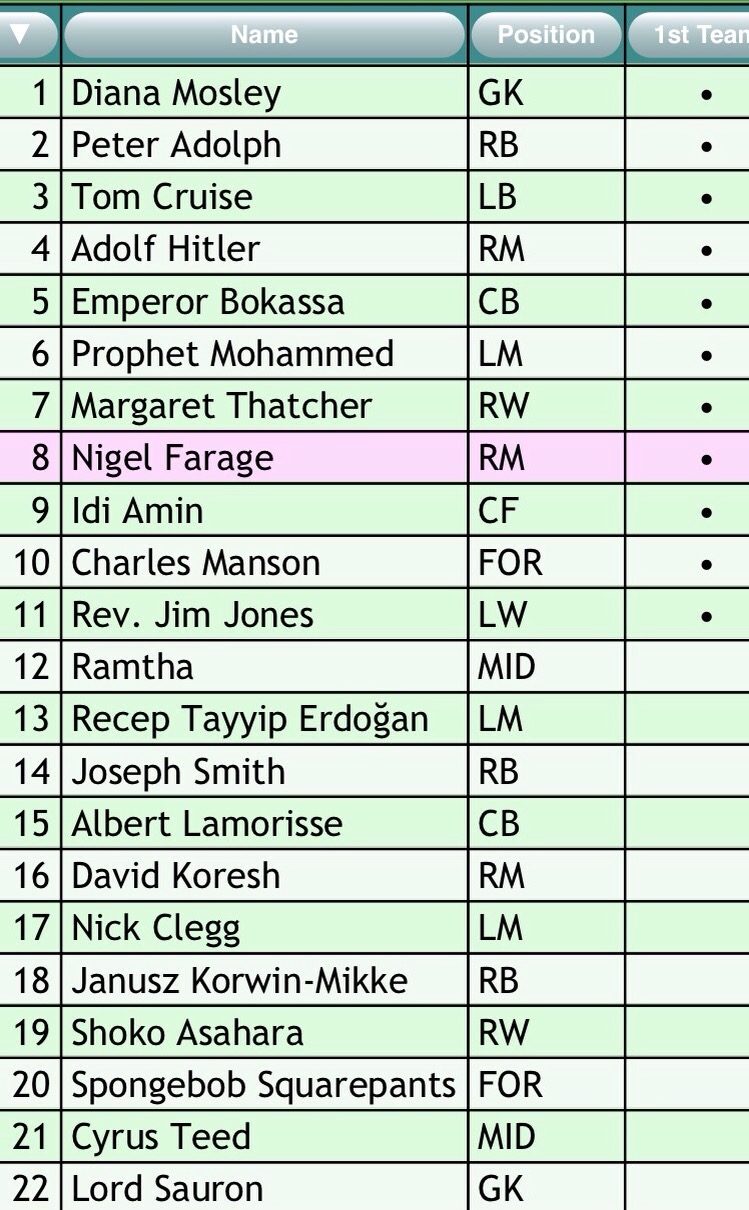 Before the depressing news came through; James had won, I came second 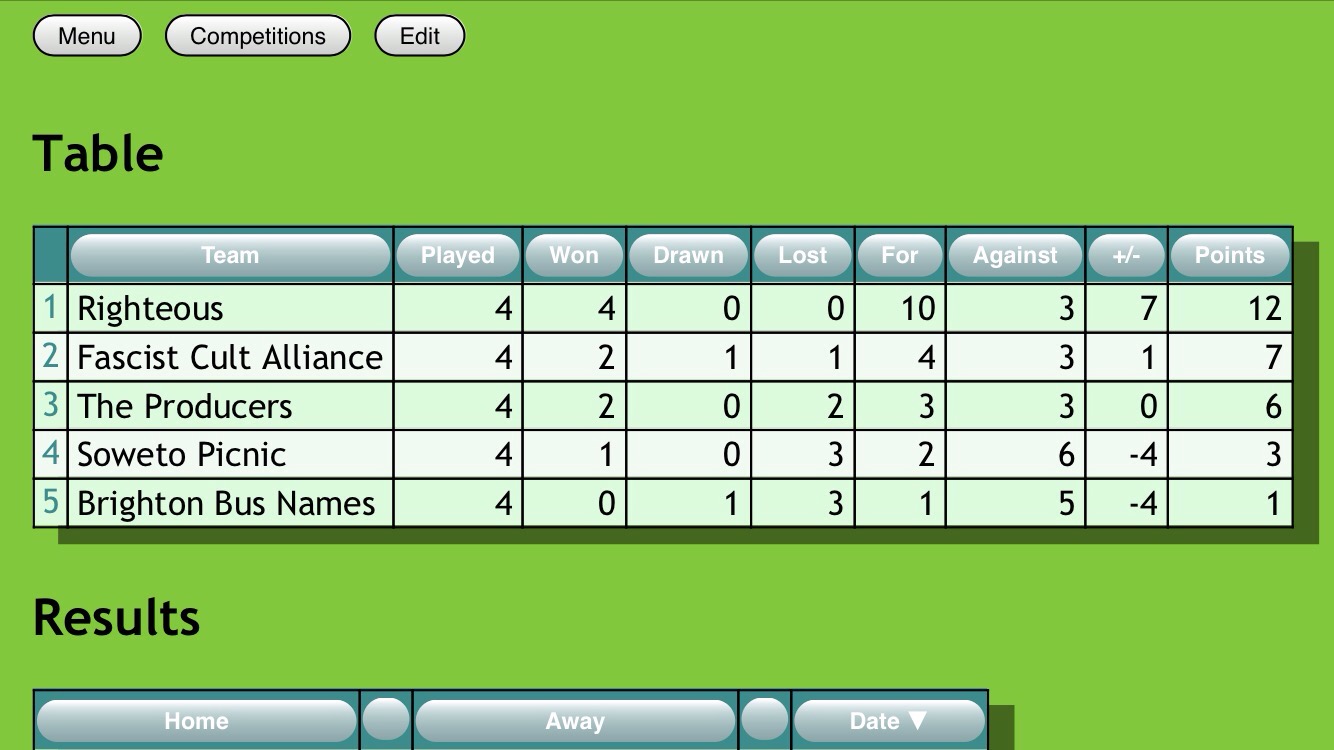 And these are mine until the next time.

Didn’t we have a lovely time the day we went to Hailsham!
We came, we saw, we upset the neighbours
Six blokes arrive in Hailsham to play the World Cup and James goes home the winner….yet again! (He was Argentina if you’re interested).

Three days, six men and a World Cup
After months of planning, Steve, Pete, Chris and James arrived in an unsuspecting neighbourhood of leafy Hailsham on Friday morning with their lovely branded shower gel 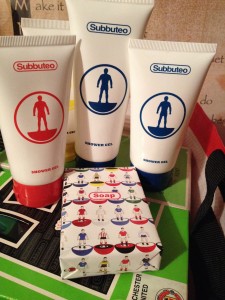 The accommodation was perfect 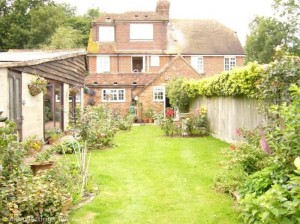 with a lovely pond at the edge of the property, perfect for our ‘flicker profile’ interviews. 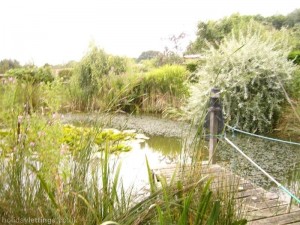 This left James and Stephen to fight over the bunk beds. Their argument over who should go on top due to who snored loudest or who farted in their sleep most would rage on until something we didn’t care about was agreed on….because we had nice separate rooms!

We hardly saw inside the house due to the large amount of time spent in….THE SHED, where we had set up two full size Subbuteo pitches to play the 2014 World Cup in its entirety. 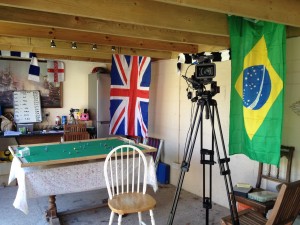 Much to Chris’ annoyance, Steve and James were intent on filming most of the weekend’s activities and with a two camera shoot, Chris just had to bite his lip and get on with it. 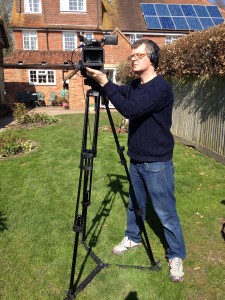 With Steve and James having set up for the film’s intro, Pete and Chris reluctantly took their direction well. Filming over for the time being, we relaxed briefly before taking on the monstrous task we had set ourselves. 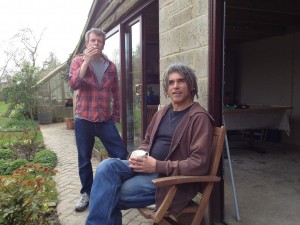 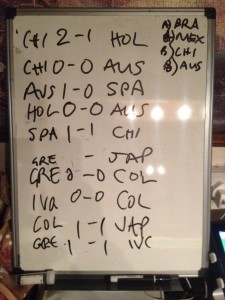 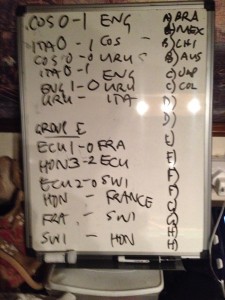 after the bonnet of his car made a bid for freedom midway through his journey – gave us a well needed lift enabling us to flick on through the night. By 01:00 Saturday morning – slightly behind schedule – the remaining games were ‘autoplayed’ on our bespoke online system. 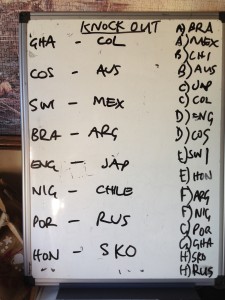 With Brazil, Argentina, England, Mexico, Ghana, Colombia, Costa Rica, Australia, Switzerland, Japan, Nigeria, Chile, Portgual, Russia, Honduras and South Korea progressing to the knockout round, we retired to our beds,
proud of our achievement so far.

Early next morning James, awoken by Stephen’s early toilet visit and having been told it was 9am; prepared himself for the days’ events. Upon discovering it was actually 7:30, their argument woke Pete in the adjoining room. “It’s like having bloody kids in the next room”, he said.

Soon we were all nursing our hangovers 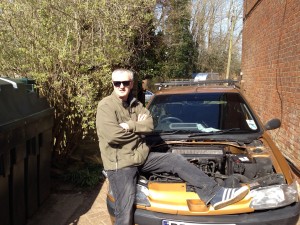 which were made all the worse by the neighbours’ rather loud banging, sawing and getting on with their quiet country lives.

Well, maybe we had upset them with some overly loud talking and swearing in the small hours but the mid day toxic bonfire seemed a trifle unnecessary!

Still, we were in the shed with locked doors so they were inhaling their own nasty fumes, not us!.

After breakfast we embarked on the Round of 16 – luckily we were recording the results on Chris’ amazing online system, The Subbuteo Companion as I’m not sure anyone would remember by now.
Having made our Quarter Final draw before the start of the competition, we would find out who we would represent as the first knockout round proceeded.

In the opening knockout game, Ghana beat Colombia 2-0 meaning Chris would represent them in the first Quarter Final against Pete. 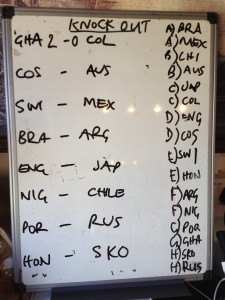 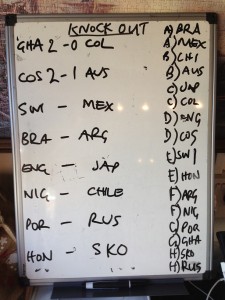 James and Stephen would play as the winners of the next two games.

Switzerland 2 – 4 Mexico – meaning Stephen took Mexico in QF 2 and Brazil 0 – 2 Argentina pitched James against him in a Latin American thriller! 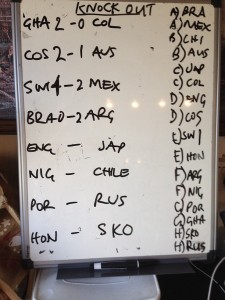 England’s 1-0 victory over Japan meant Steve would take on an as yet unknown wildcard opponent in their game against the winners of Nigeria vs Chile. 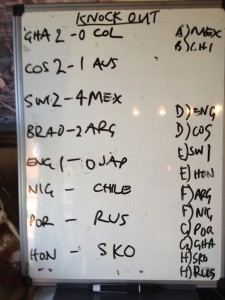 With Chile winning 2-1, our final flicker arrived in Dunstan. Having never met competitively, his place in QF 3 against Steve was perhaps the most tasty contest of the weekend. 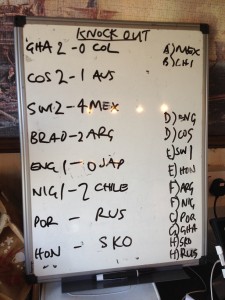 And of course we all wanted England to progress. we may well have been tired and drunk but we’d come to play the World Cup and there was a strict schedule in place. 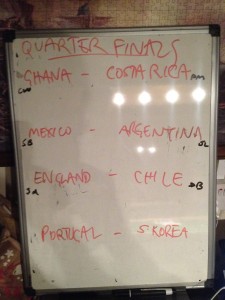 After some well earned Pizza, the fun was over. We returned to the shed for the Quarter Finals – now it was serious!.

The sensible money was on a Chris vs James final but with Pete’s Costa Rica taking Chris’ Ghana 1-0 in the first QF, could there be a surprise on the offing? Next up, favourite James as Argentina whipped Stephen’s Mexico 7-2; pitching James against Pete in the first Semi Final.

Excitement grew as Dunstan’s first competitive match with us neared. Could Steve take the pressure of not only representing England, but taking on
the new boy? No – it was written! Fired up an raring to go, Dunstan’s Chile were unstoppable – winning 1-0, shattering Steve’s dream of retaining the the trophy in the process. A humiliating defeat.

In the final match of the day, two other beaten quarter finalists – Stephen and Chris played as Portugal vs South Korea respectively.

Despite a sterling performance from Stephen, Chris’ 3-1 victory took both himself and South Korea through to the Semi Finals and we were back on schedule just in time for Match of the Day.